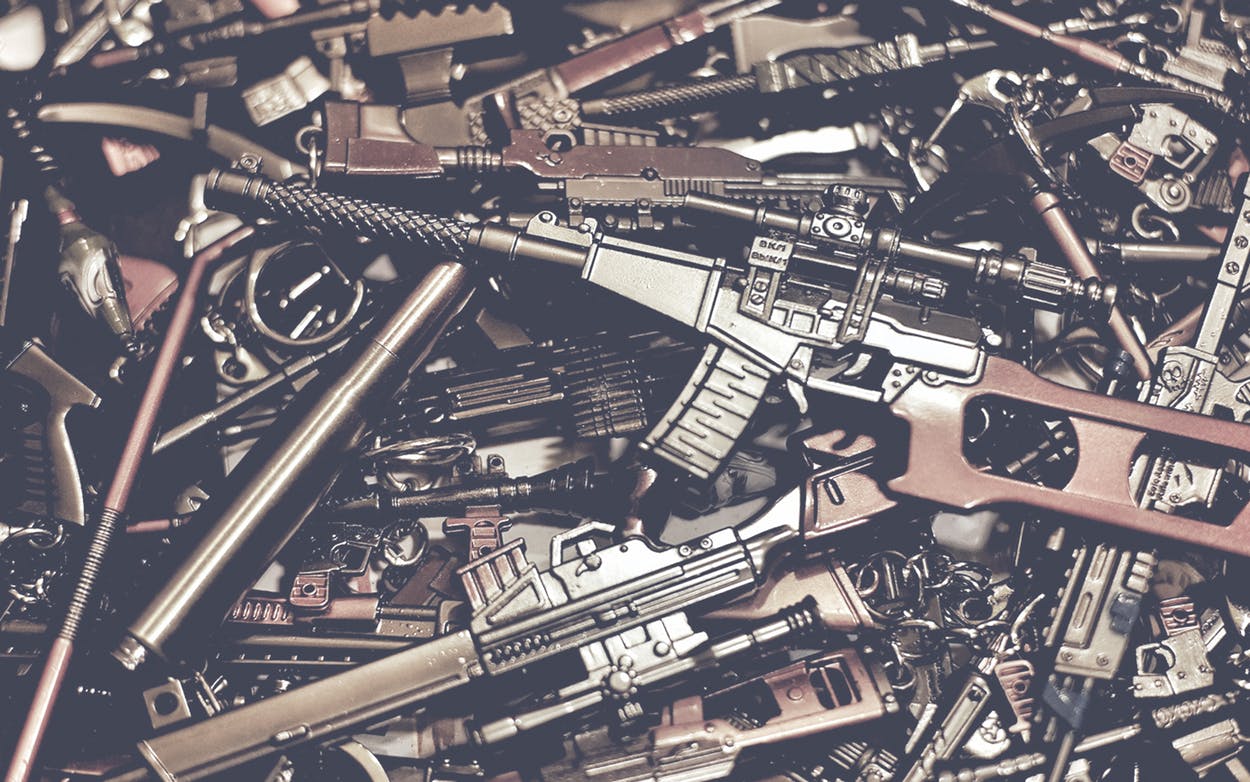 but what does that mean?

Well, in short, it means that the County Sheriff in all of these counties has stepped up and said no to unconstitutional and tyrannical government. There is no better display of this than in the good ol' state of Texas where 7 counties have made this declaration.

Adolf Hitler, Benito Mussolini, Saddam Hussein, and Pol Pot were among the villains mentioned at a recent meeting of the Hood County Commissioners’ Court, but no menace loomed as large as someone Hood County Sheriff Roger Deeds would describe only as “a person who’s running for president.”

Not even a man who claimed to have campaigned for Beto O’Rourke in 2018 would defend the Democratic presidential candidate’s recent promise to confiscate assault-style weapons if elected to the White House. Daniel Peters told the commissioners that he’s gay and liberal and worries that some gun extremists “want to kill people like me.” Nonetheless, he doesn’t think the government can always protect him, so he relies on his firearms. “This queer shoots back,” Peters said.

Peters was speaking in support of a proposal to make Hood County a so-called Second Amendment sanctuary, a resolution the commissioners unanimously approved at an early October hearing. Though the Hood County resolution was sponsored by Commissioner James Deaver, he said Deeds had pushed for the measure and that the commissioners “just agreed.” Hood County is one of seven Texas counties—mostly Republican and rural—to officially establish themselves as gun sanctuaries in the past year and a half, three of them after O’Rourke announced his support for a mandatory buy-back of assault weapons in the aftermath of the mass shootings in El Paso and Midland/Odessa.

Like resolutions in several other counties, Hood County’s measure affirms support for any decision the sheriff makes “to not enforce unconstitutional firearms restrictions against any citizen,” and it shields county funds, employees, and buildings from being used in service of any law “that unconstitutionally infringes on the right of the people to keep and bear arms.”

Before voting on the measure, Commissioner Dave Eagle pointedly noted that the sheriff is the highest-ranking law enforcement official in the county. “What does that mean?” Eagle asked rhetorically. “What it means is he ranks above any feds that come in here.” Later, Eagle directed Texas Monthly to a 1997 Supreme Court decision, Printz v. United States, in which the court held that the federal government couldn’t compel sheriffs to provide background checks under the Brady Handgun Violence Prevention Act. The case originated with Jay Printz, a Montana sheriff, and Richard Mack, an Arizona sheriff who is affiliated with the Oath Keepers, a far-right group of veterans and law enforcement officers who pledge to disobey laws they consider unconstitutional. Deeds says he’s sympathetic to the mission of the Oath Keepers, which the Southern Poverty Law Center calls one of “the largest radical antigovernment groups” in the country, one whose philosophy is “based on a set of baseless conspiracy theories.”

Deeds is vague about how Hood County might respond to federal gun control legislation. Though the resolution stipulates that the county won’t use any of its resources to enforce unconstitutional gun laws, the sheriff told Texas Monthly that he and the commissioners’ court will have to decide what to do when the time comes. “We’re not ignoring anything because there’s not laws out there,” he says. “It’s a few politicians making statements.” He said the measure is “kind of symbolic” and designed to reassure county residents. Still, if a state or federal law eventually emerges that he believes infringes on the Second Amendment, Deeds emphasized, he’s “not going to be on the side” of taking those rights away.

On Friday, O’Rourke dropped out of the presidential race, not that Parker County Commissioner George Conley thought he was White House-bound. Indeed, the El Paso politician was polling at 2.3 percent nationally on the day Parker County commissioners passed their sanctuary resolution. But Conley believes other Democratic politicians will follow O’Rourke’s lead. (In fact, several current and former presidential candidates have already expressed views similar to O’Rourke’s.) Still, Conley acknowledges that the county will cooperate with federal authorities in spite of his resolution. If the commissioners’ court thinks a federal gun law is unconstitutional, he says, they’ll fight it in court.

Of course, fears about gun seizures predate O’Rourke’s presidential bid. Edwards County, a rugged patch of southwest Texas with a population of about 2,000, declared itself “a sanctuary county for gun owners” in June 2018. Similar to Hood County, Edwards won’t use county resources for any “acts, laws, orders, mandates, rules, or regulations that infringe on the right of the people to keep and bear arms,” including registering existing lawfully owned firearms and bans or restrictions on semiautomatic weapons and ammunition.

Edwards County commissioner Lee Sweeten sponsored the resolution after seeing people discuss possible gun restrictions on social media. When he saw that counties in other states had declared themselves Second Amendment sanctuaries, he forged ahead.

His fellow commissioner William Epperson told Texas Monthly he needs his gun to fend off dangers in his rural county, like rabid foxes. “We’re fifty miles from the border. What happens if there was another Pancho Villa?” he asked. “I have the right to defend me and my family. I work by myself in the country — you never know what’s going to happen.” Once, he said, he was walking through a pasture and looked up to see “fifteen to twenty wetbacks” staring at him. “I was surrounded. What if it’s my wife?”

Just as O’Rourke was accused of staking his floundering campaign on sensational political positions, some wonder whether the defensive crouch county officials are taking in anticipation of an imagined federal gun grab is just a reelection stunt. Deeds, for instance, first floated a Second Amendment sanctuary declaration in Hood County at a candidate forum, though he says the resolution was inspired by constituents who kept asking him if he was going to let federal authorities take their weapons. “They’re concerned,” he told commissioners at the October meeting. “There’s a lot of people in this county that are sportsmen, hunters, just good, law-abiding citizens that own guns.”

“Sanctuary city” is a somewhat elastic term. Originally used in the eighties to describe communities that welcomed Central Americans fleeing conflict in that region, it’s now used as a label for cities that minimize involvement with federal immigration authorities. In 2017, the Texas Legislature passed legislation banning such “sanctuary cities.” More recently, by late September six Texas cities had declared themselves a “sanctuary city for the unborn.”

Deeds disputed any parallels between sanctuary cities for immigrants and sanctuary counties for guns. He told Texas Monthly that jurisdictions that arrest undocumented immigrants and then “just turn them loose” are wrong, and that “they’re the ones that aren’t following the law and serving and protecting their citizens in those cities.”

Jeff Davis County, where commissioners considered a Second Amendment sanctuary resolution in August, killed its own proposal after a lawyer questioned the county’s authority to take such action. James Allison, general counsel for the Texas County Judges and Commissioners Association of Texas, told Jeff Davis in a written opinion that “Texas counties have no authority to create a ‘sanctuary’ for or against weapons,” the Big Bend Sentinel reported. Allison suggested that counties draft resolutions carefully “to avoid implying any legal effect.” County attorney Teresa Todd, meanwhile, recalled a violent standoff in the early 1990s between Texas Rangers and the Republic of Texas, an armed militia group. She worried the resolution would embolden similar “sovereign citizens” who consider themselves above the law, according to the West Texas newspaper.

“Nobody believes in gun rights quite as much as Jeff Davis County,” the Sentinel quotes her as saying. “But none of these other counties have had an anti-government standoff, with blood in the streets.”

Where else is this happening?

In Lake County, FL,  the Board of County Commissioners passed a resolution Tuesday to declare Lake County a Second Amendment Sanctuary.

The vote was 4-0 in favor of the resolution.

Commissioner Josh Blake said the resolution was brought up because of the national debate over gun control.

Blake said Lake County is first county in Florida to declare itself a Second Amendment Sanctuary.

More than half the counties in Illinois have passed similar resolutions, Blake said.

You can also add Arizona County to the list as well.

There will no doubt be more counties joining the list as this movement propagates throughout our country, but the sanctuary movement itself is not anything new. It first started in 1983 when a the city council in Madison, Wisconson passed a resolution that supported the city’s churches that offered El Salvadoran and Guatemalan asylum seekers sanctuary from federal immigration agents.

That marked the birth of what we broadly understand to be modern sanctuary status in the United States.

Notably, there is no widely accepted legal definition determining what such a sanctuary is or its limits. That opened the door to sanctuaries of other kinds. Example: Second Amendment sanctuaries.

I’ve had my concealed carry permit for 20 yrs. I worked in a dangerous job for 12 yrs. and drew my weapon more times than I can remember. Never shot one round, but it did change people’s behavior real quick. I’ve been home invaded by a guy who was IDed from blood samples in my living room. I didn’t shoot him, I beat him senseless with my 9MM, he ended up being an escaped convict. So yes I’m pro 2nd amendment.

Actually, ANYONE that attempts to subvert the constitution without the established process being followed to the letter is guilty of treason. If they are an elected official the oath they took when accepting the office has words effectively saying they swear to support and uphold the constitution. If they as elected officials find it easy to attempt to subvert our constitution…perhaps a firing squad should find it easy to squeeze the trigger, as they are subversive, anti constitutional and terrorists by definition….